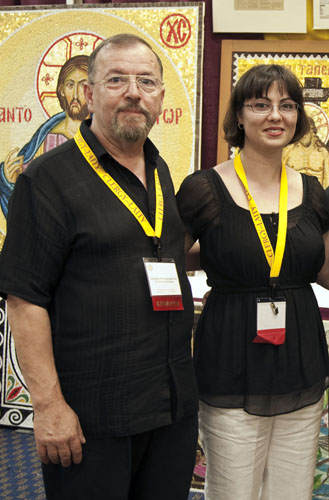 George is one of the most widely recognized Byzantine Iconographers alive today. Brunilda is a most gifted mosaicist. Along with a support staff of artisans and craftspeople, Byzantine Artworks has developed a wide range of capabilities, from design consulting, master plans and restorations, to the production of the finished art work including mosaics, iconography, stained glass and stonework. The aim of the work we do is to create spaces which, according to Tradition, elevate the person towards the contemplation of God by creating a heaven on earth. We invite you to take a look around, and check back often, as the site is a work in progress. If we can answer any questions, please do get in touch.

George Papastamatiou - Born in Pythagoreion, Samos, in 1948, I moved to Athens with my family in 1960. Since early childhood, I worked with my grandfather and my father, Stamatios Papastamatiou, who were both well-known hagiographers in Greece. My father and my godfather, Paul Angelis, Professor of Fine Arts at the University of Athens, were my instructors. During the period of my secondary education I worked in my father’s studio in Athens and studied and apprenticed under my godfather in fine art painting.

Influenced by the strong movement for the revival of pure Byzantine hagiography by the famous Photios Kontoglou, I turned my attention towards this type of painting and soon was accepted as a student and apprentice at the Studio of Byzantine Art of Demetrios Cafis, retired professor of the Ecole des Beaux Arts in Paris. I worked with him until 1969.

After fulfilling my military service obligations from 1969 to 1970, I established my own studio of traditional Byzantine iconography in Athens, eventually merging with my father’s studio.

I was soon working on many churches in Greece, and then beginning work on churches in the U.S.A. I traveled extensively, coordinating the work in Greece, the U.S.A., Central America, South America, and Australia. In 1984, I established a permanent studio in the U.S.A., concentrating more on the Western Hemisphere churches, yet keeping the connection with my resources in Greece.

After working in studios in Michigan and Ohio, I moved my base to Boston in 2006.

My work, which has received numerous awards, has been exhibited in many galleries and museums around the world. It is included in the collections of the Ecumenical Patriarchate of Constantinople, the Patriarchate of Jerusalem, the Vatican, and the Smithsonian Institution. Several pieces can also be found in private collections. My work in hagiography has been recognized and endorsed by the Archdiocese of Greece and in Orthodox jurisdictions around the world.

I am particularly grateful for the opportunity to have acted as teacher to hundreds of students in my life. Many of these students have continued on to become active hagiographers in their own right. Some of them are still working with me today.

The focus of my work has been, and is, the adornment of churches in the traditional Byzantine style. I also do private and commercial commissions. My studios, here and in Greece, include a staff of artists and technicians who are all highly trained and experienced iconographers, mosaicists, stained glass artisans, gold leaf specialists and installers. I also have established connections by which to facilitate a number of other types of work.

Brunilda Rizaj-Papastamatiou - Ms. Rizaj grew up in Tirana, Albania, and attended the Academy of Fine Art, Tirana. Upon moving to the U.S., she followed a path that would allow her to continue producing art. This is what brought her under the tutelage, at first, and marriage to, her husband, George Pastamatiou, an iconographer in the Byzantine tradition. The two work together decorating church interiors, primarily, which Mr. Papastamatiou has been doing since 1958. The two now do business as “Byzantine Artworks, LLC”. specializes in Byzantine mosaics and stained glass. Her work can be seen in Watertown and Webster, MA, the St. Methodios Faith and Heritage Center in Contoocook, NH, and her crowning work in Greenville, SC, among others.